It is well noted that the agreement of Armistice began at the 11th hour of the 11th day in 1918. Some time before this, about the time the the allies were preparing to make their final push towards Germany, the United Grand Lodge of England had already issued a communique to Lodges within its constitution to provide a return of those Freemasons who had died as part of the actions in this Great War. The document originally requested names of those who had fallen "in His Majesty's Service (Naval, Military or other) since the 11th November 1916".

Lodges were instructed to have their return in by the 10th October next [assumed to be 1918]. The copy of the document for Comrades Lodge No. 2976 shows that William Lorraine, P.M. signed on the 15th October 1918 and in this instance of the return 9 members were recorded and names transmitted to Grand Lodge.

Such an undertaking, even if were carried out today, would be prone to problematic data return. The scope and criteria for inclusion against the form unclear. What may seem fair for inclusion in these modern times, were the basis for exclusion from the forthcoming publication. Some of the issues and questions generated were

Not all Freemason's names on the return were included in the final published document, providing evidence that some process was being followed to validate the names, and in doing so, by some strict criteria. The submission from Comrades' Lodge shows 3 of the 9 original names scribbled out.

The task of bringing order to the list was to academic of St. Johns College, Oxford to Frederick (William) Hall, also a Freemason. Frederick was a member of Apollo Lodge (associated with the University of Oxford) whose entries within the document shows the heaviest recorded Masonic loss for any Lodge. The book was published under the banner of the Oxford University Press having been commissioned to be a permanent record by United Grand Lodge of England at Freemasons Hall, London W1 (which was at the time not the grand monolith "Peace Memorial" facade that exists today at Covent Garden).

The book is in two parts. 3064 names are listed in part 1 under the lodge number, name and their service rank starting with Lodge No.1 and ending with Lodge No.3976., followed by an alphabetical index - part 2 - of all the listed brethren.

It had been recognised that the book and its contents, however noble its intention, was somewhat flawed, because of the criteria and scope reasons stated earlier. To continue the theme, there are some mistakes which can be categorised thus:

The book is by dimension, 8.5 inches in height, 6.75 inches in width and its 139 pages contribute to its depth of 3/4 inch. The paper within is of high quality, each page watermarked with "Abbey Mill" and an image of a coronet. The binding is of a grey tone card with brown stencil denoting its title - MASONIC ROLL OF HONOUR, 1914-1918 - , surmounted by the crest of the United Grand Lodge of England, together with its motto: "Audi, Vide, Tace".

A modern transcription of the names within the book can be downloaded here. 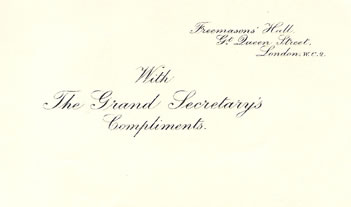