This site has been produced to provide a searchable database purely on Freemasons who took part in and died in the course of their duty during times of national conflict. Whilst the site is based only around Freemasons, it recognises the supreme sacrifice of all British, Commonwealth and Allied troops who lost their lives in the pursuit of a greater good.

This database is primarily taken from and based on the 1921 Book, The Masonic Roll of Honour 1914 - 1918, which was commissioned by the United Grand Lodge of England and distributed out circa Sept. 1921, and further from a Scroll which is today housed in the Shrine at the Peace Memorial, Freemasons Hall, Great Queen Street which was completed by 1940.

The original document had 3064 names from all ranks and service arms and it should be noted that there are many discrepancies within which would give cause to question. e.g. Names may appear twice under different Lodges, or there are names which may be missing. Whilst these may be corrected over time, please respect the fact that the book was written in post WW1 Britain, and many reasons could exist for these errors.

It is the aim of this project, however, to identify, study and correct the Roll of Honour to a modern working version and make available to the public. Over and above the printed version, the links contained within the database may give further history and citations on the individuals (where permission has been sought and/or if received for inclusion). In many cases we have considerably more information than the summary shown in the search facility. Please feel free to contact us for more background.

From August 2019, this online version will include a growing list of Freemasons who participated in campaigns across the globe, which is a change from the original and marks an evolution in the history of this project.

As it stands today, there are 4166 names recorded against this database. 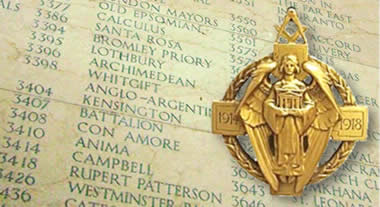 The Hallstone Jewel is of interest to both Freemasons and collectors alike. Find out a little more about its history. 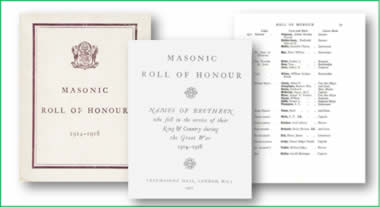 Discover more about the original publication, the 1921 book - Masonic Roll of Honour 1914 -1918, and the names which it contains. 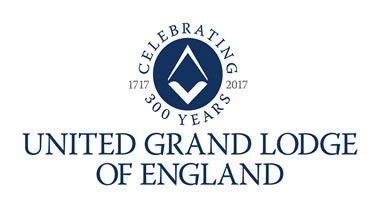 About 1 in 10 Victoria Cross awards were issued to Freemasons. Find out who they were.